Abstract
The aim of this paper to highlight the enabling powers of participative architectural design strategies and thus leaving space for uncertainty and surprise, with a particular focus on the work of Responsive Design Studio, a young emerging practice based in Zurich and Cologne. The playful synergies that can result from a constant dialogue between designer and user, object and function and the successful application of digital design and fabrication techniques as new, encouraging tools rather than dominating drivers are exemplified in a number of international projects that the studio has realized within the past few years.

Architecture is creation, and it is creative. But it is not only the process of envisioning space and use that needs to be of compelling spirit. The fantasy of creation does not end when the built form is finished. The user himself has a constant impact on his immediate environment, resulting in continuous transformation and interaction. This demands a process of participation where the user is deliberately asked for input and engagement. Participation thus means that designer and user join forces in a playful act of creation.

The act of playing is a process of learning, of taking over responsibility while being inherently creative and joyful. Playing means direct interaction with the environment, personal engagement and building knowledge. While playing children learn and develop social and emotional behavior it also empowers them to express themselves and their unique identity.[1]

The focus of Responsive Design Studio is to revive this playful experience and to forge a constant dialogue between designer and user, between object and function, allowing for engagement, growth and change. The studio`s projects leave elements of design open, and users are encouraged to participate with their own input – whether this is creating the equilibrium of a floating object, or adapting the spatial layout of an exhibition design. The concept and objective of the studio is that the projects do not function to their full extent unless the targeted user becomes actively engaged.

As design and research platform, the studio is not focusing on any technology, technique or material in particular. The interest is not in becoming specialists in one area but in a sensitive use of the tools at hand. The studio´s design approach is thus playful in both conceptualization and the use of computational applications as well as in the attitude towards architecture referred to as the art of manufacturing. The manufacture is equally process and product comprising designer and user as producers of space and creative energy.

The Cone
“The Cone” is an interactive installation, which was first realized at the 2007 Burning Man Festival in Nevada, USA. The project has since then evolved and as of 2009 become a yearly attraction at the Voodoo Experience Festival in New Orleans.

The cone-shaped sculpture measures nine meters in height and five in diameter. It consists of a two-layer structure inspired by the principals of Russian engineer Vladimir Shukhov, due to leading requirements regarding weight and structure.[2] The inner cone is fixed to a base platform, which also works as the entrance from below, and the outer cone is rotatable attached to the top of the inner and a bottom rail on the platform.

Image 01: The installation of “The Cone” is possible without the need for heavy machinery or cranes.

Ensuring this flexible bearing the outer structure can be revolved by manpower around the inner one.[3] Due to the filigree lattice construction method this overlap of layers creates a visually stunning, atmospheric interference effect and especially inside “The Cone” provokes the impression of being part of a giant machine. 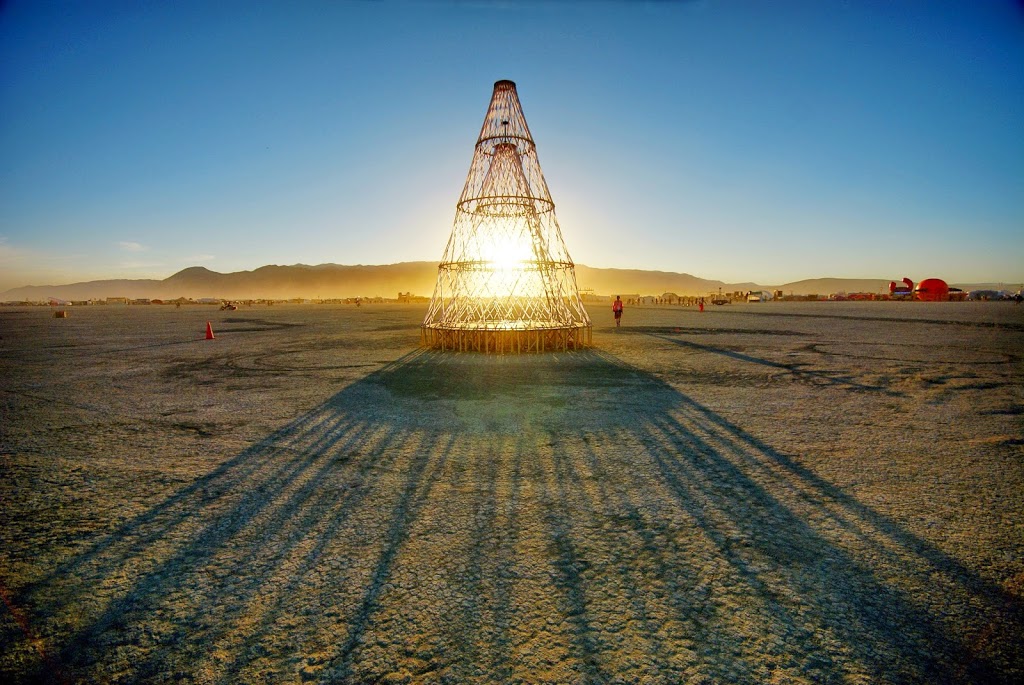 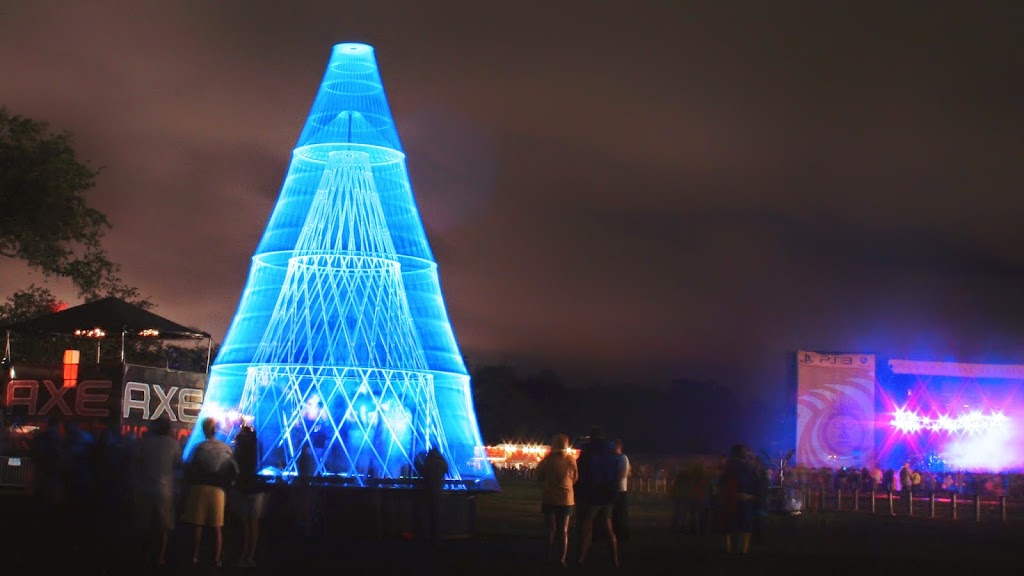 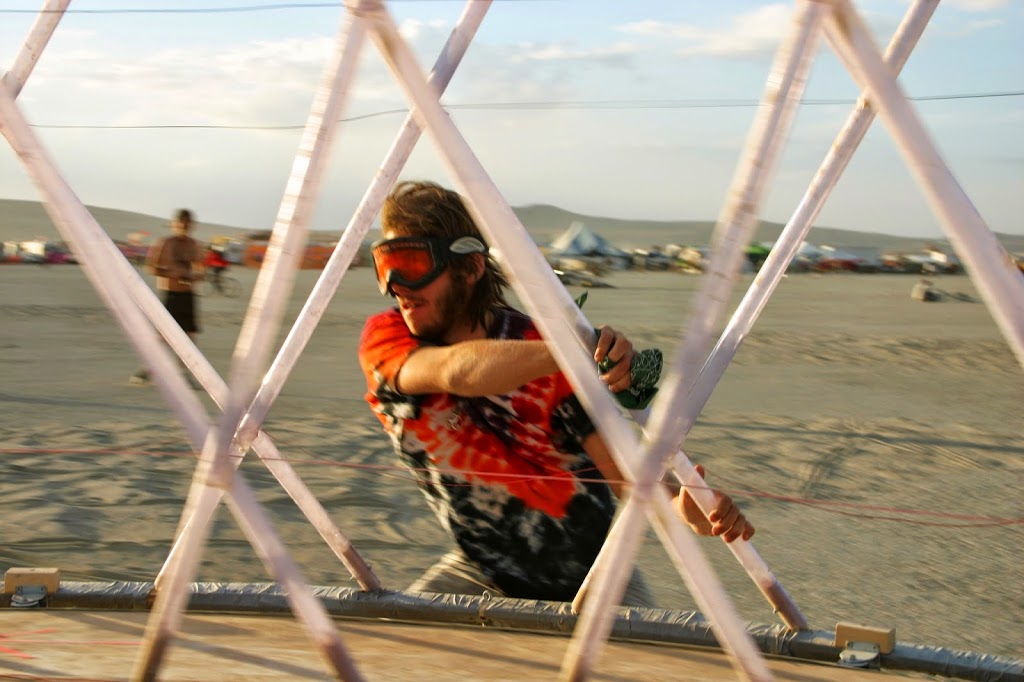 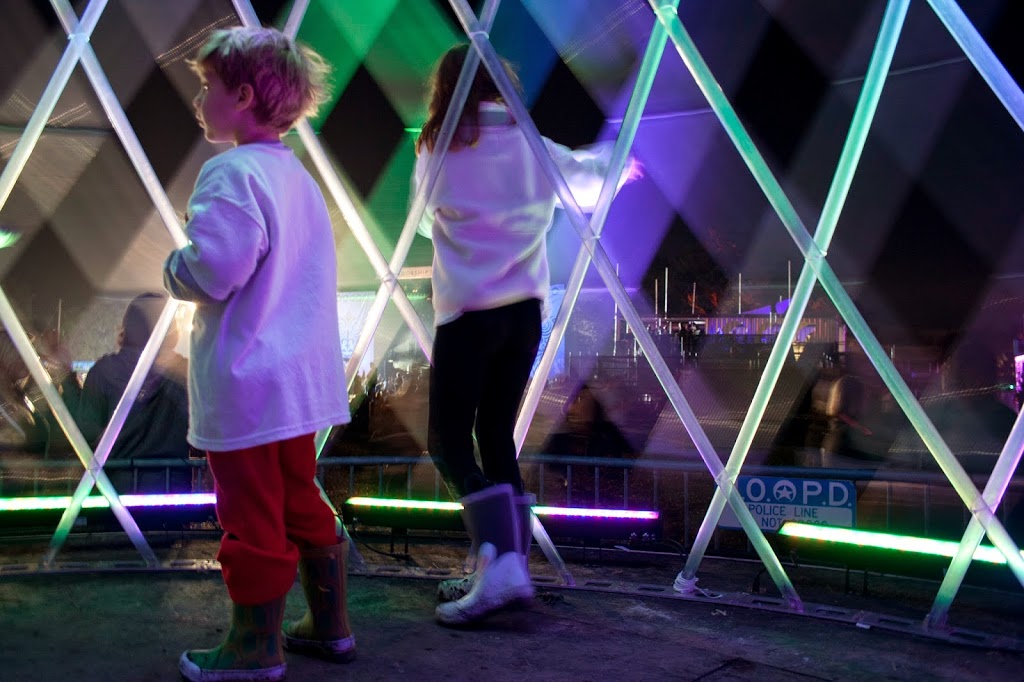 As Burning Man, also described as “an annual experiment in temporary community”,[4] gives any participant the opportunity for radical self-expression, many art installations require interaction as crucial contribution to complete the pieces.[5] The Festival thus presented a perfect playground for building and running the first prototype of “The Cone” as an interactive architectural installation.

Since the piece at Burning Man was very labor intensive and not durable enough to allow for multiple rebuilds, the second version has been improved in a number of ways. Formerly handmade wooden pieces were replaced by digitally designed and water-jet cut aluminum parts. These lightweight blades are joined together to form the horizontal rings, which in turn hold the transparent PVC tubes that make the structure. Moreover an interactive lighting system was developed by David McCallum and Allan Day in Toronto. An Arduino microcontroller measures direction and speed of the spinning structure and transfers the signal via DMX to twelve high power led bars attached to the base platform. Through this, and the inherent properties of the PVC tubes to transport the light, “The Cone” appears entirely different during nighttime. 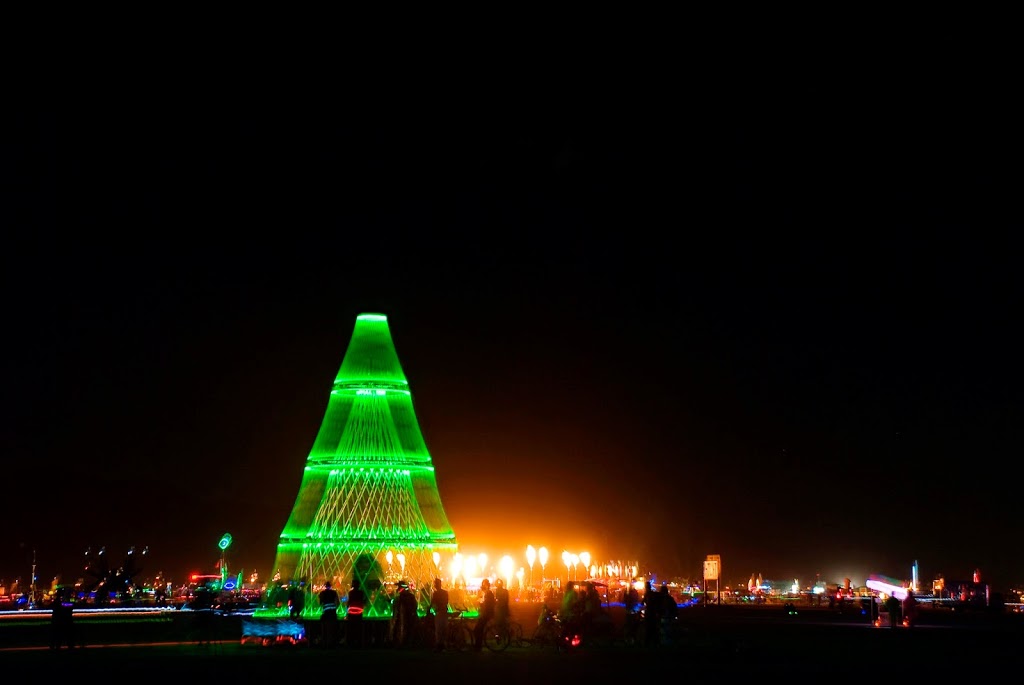 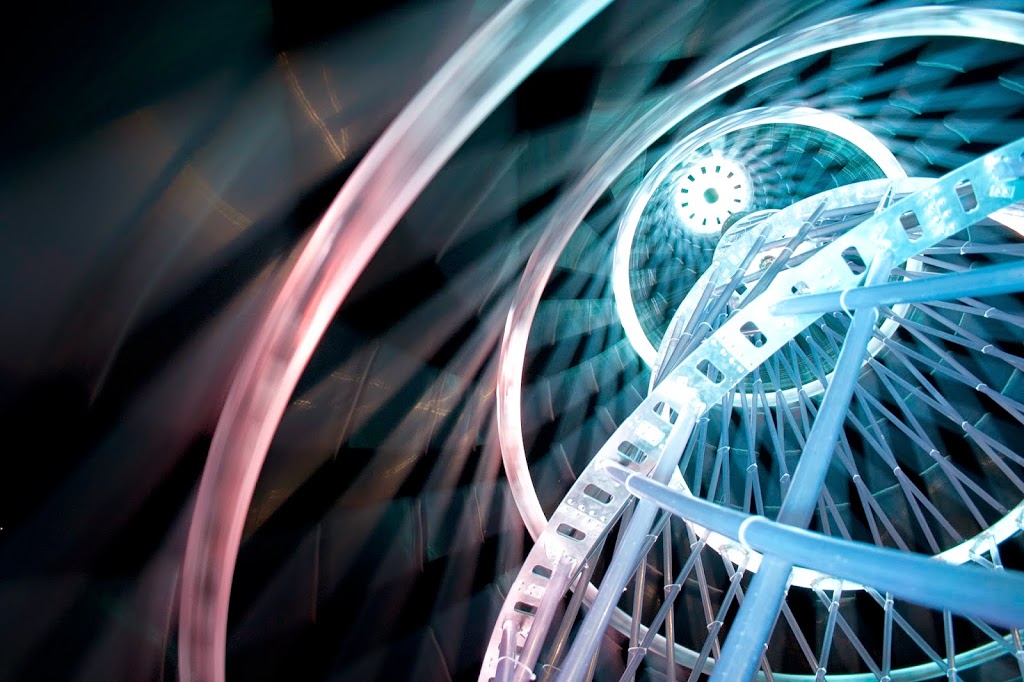 Images 06 – 07: Different types of illumination. At Burning Man (left) green LED lights were fixed inside each pipe. At Voodoo Experience (right) RGB LED-Bars were shining upwards, reflecting and tracing along the Aluminum and PVC parts. 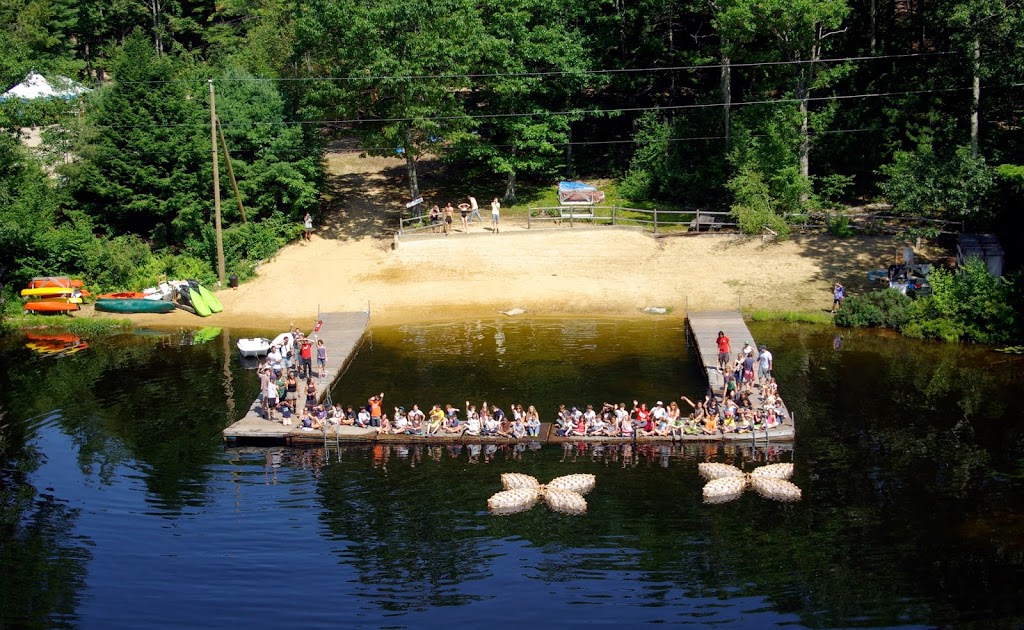 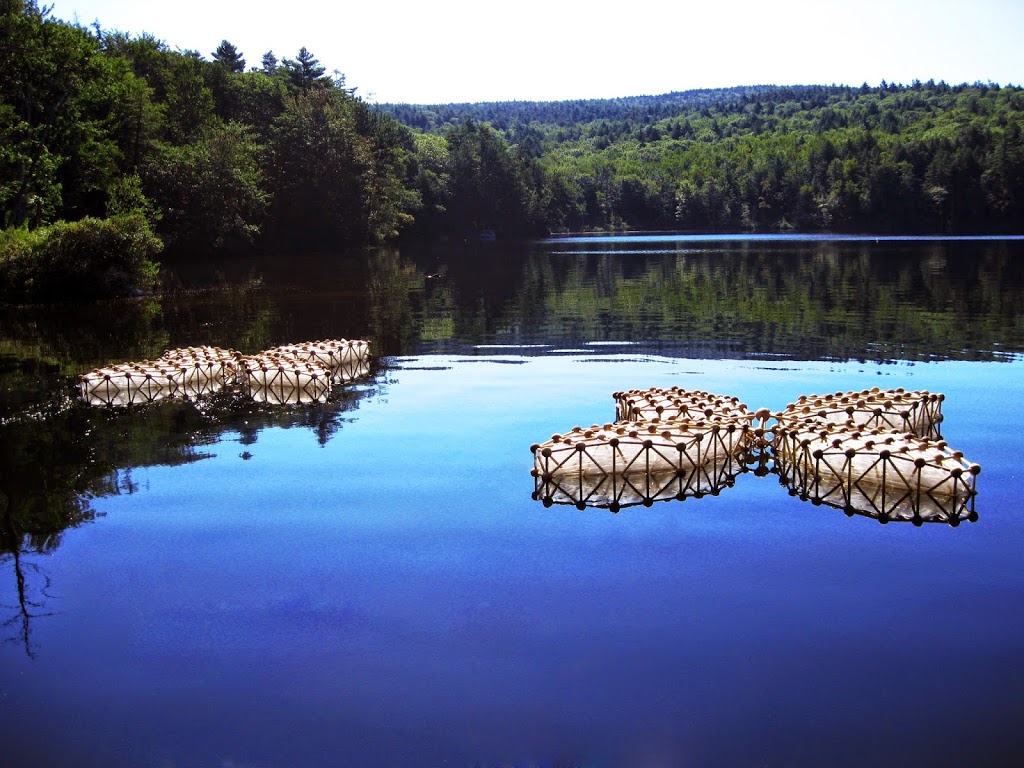 Images 08 – 09: The floating flowers with their proud creators (left) and slowly drifting away (right).

“Beam Camp” is a five-week summer program for boys and girls aged 7 – 17 in Strafford, New Hampshire, USA. The camp fosters hands-on skills in the fine and manual arts while exploring experimental thinking, design and the creative process. Each year a Project Master is assigned to propose a unique large-scale cooperative project that campers build and enjoy.

The project “Float with the Flowers” was designed for the particular location of the camp within a deep forest and next to tranquil lakes. Inspired by the rose of Jericho the approach suggests a toy that transforms from a land use towards a floating water occupancy. The structures stand closed on shore and slowly blossom open once they’re pulled into the lake and can then be used as swimming floats.

Image 10: Visualization of the opening process.

Each sculpture consists of four petals, which are flexibly attached to a central hinge that gives the piece stability when standing. The sculpture, when floating measures about four meters in diameter and has a height of two meters when standing. Every petal is essentially a space-truss, comprised of 68 wooden balls in 17 variations and 196 wooden dowels in 21 different lengths connecting them, which is filled with inflated plastic tubing to make it swim. The structure is digitally modeled in McNeel Rhino and parametrically processed in Grasshopper. This setup not only allows to adjust the form and dimensions dynamically but also produces all necessary information, regarding angles and lengths of the dowels automatically. This data is then translated into a set of easily readable templates in order to drill the balls in the correct points and thus receive the dowels at varying angles. Throughout the prototyping and design process various alternatives to produce the ball-nodes were investigated, including five-axis CNC milling, injection molding or casting in various materials. But, since in this project the physical making and educational aspects of understanding and making such geometries were in the foreground, any kind of prefabrication was discarded. However, looking back a certain amount of ready-made elements would have made production and setup much easier, faster and in cases also more playful. 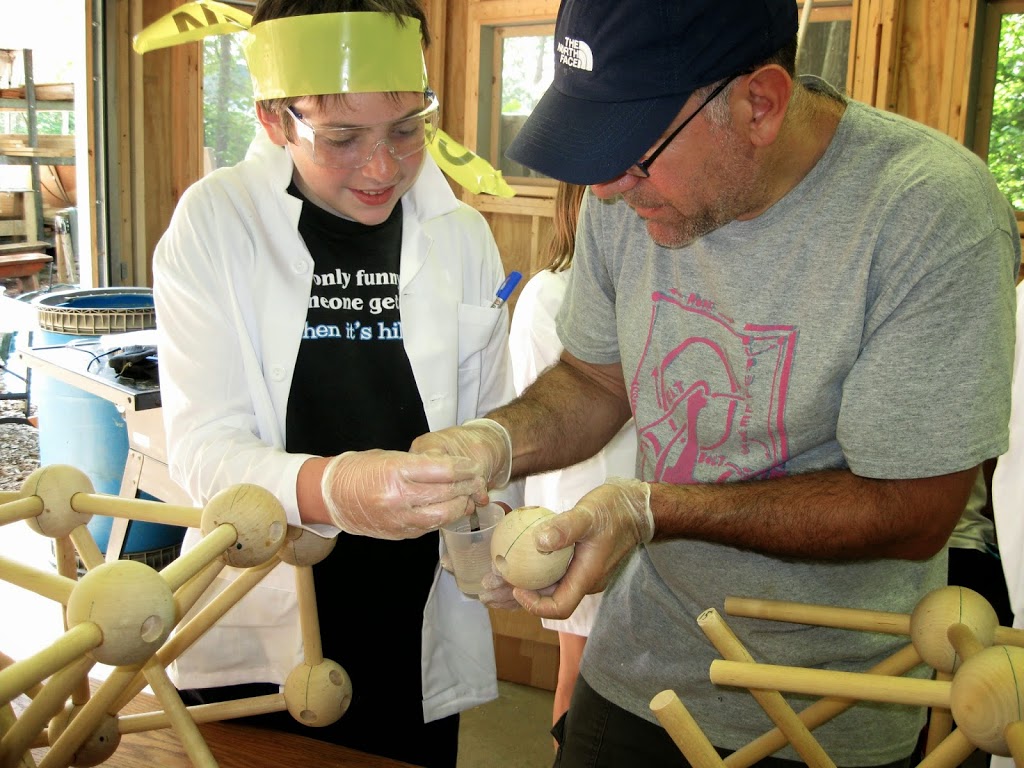 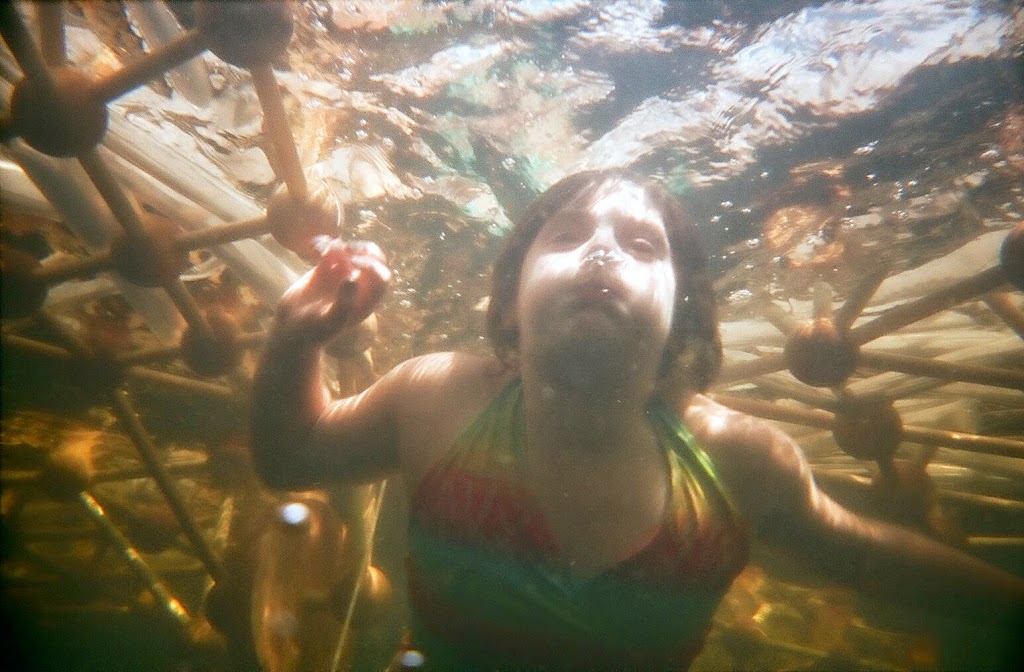 “Architectural Particles” exhibition design
The exhibition design for “Architectural Particles” at the MAKK – Museum für Angewandte Kunst Köln, is based on a digitally pre-configured and optimized modular display system, consisting of a set of polyhedrons. The project was developed with Studyo Architects and Grossgestalten (graphics) and has so far been installed twice, from May – August 2013 and again from October – November. It received the Red Dot Design Award in 2012.

When developing the system the main goal was to produce a unique and iconic framework that remains easily recognizable but allows for a large variety of exciting and unexpected design and usage options. The other important requirement was that the elements had to be sturdy enough to be set up several times and at the same time stay easily installable and enable a multitude of different arrangements. 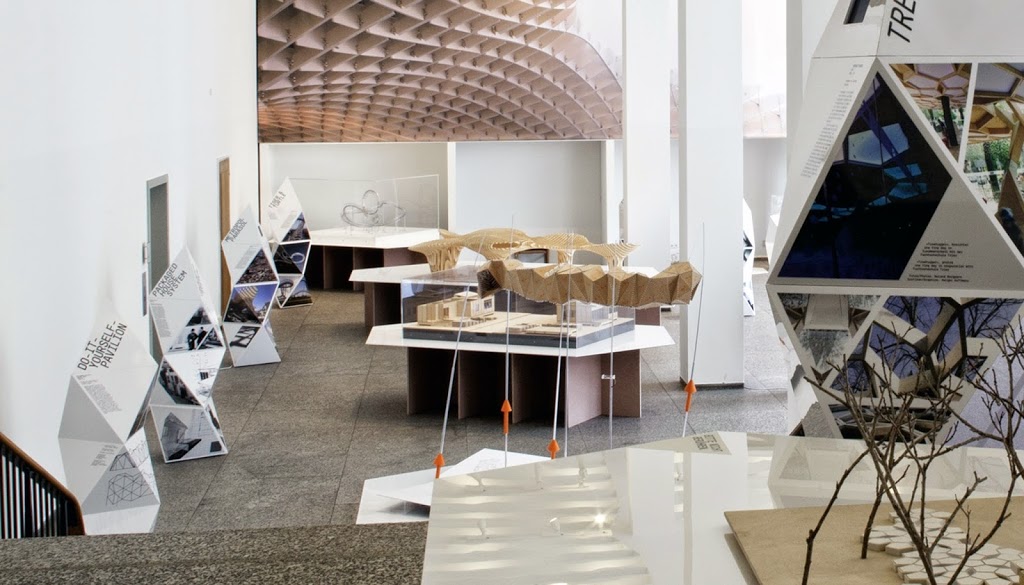 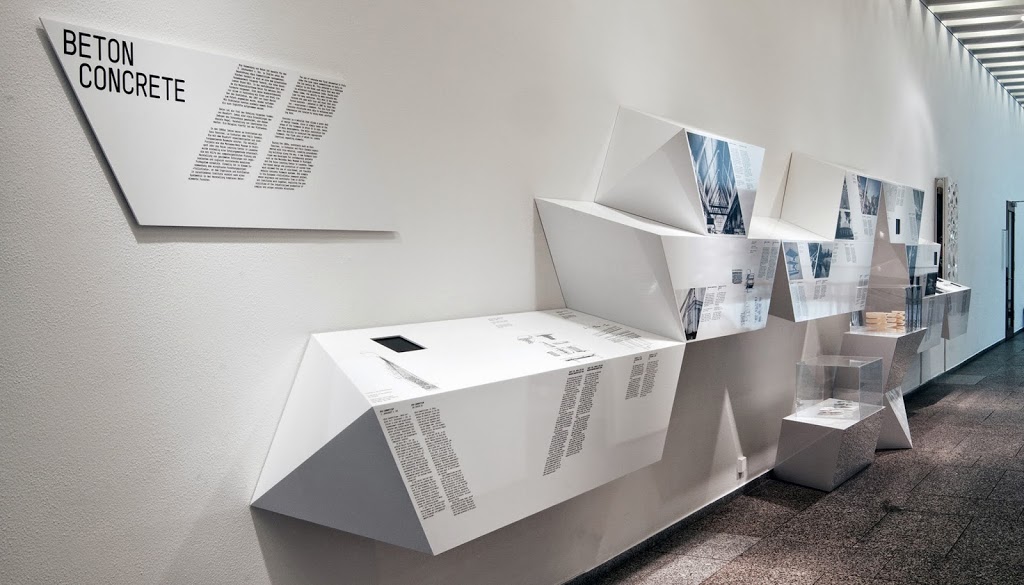 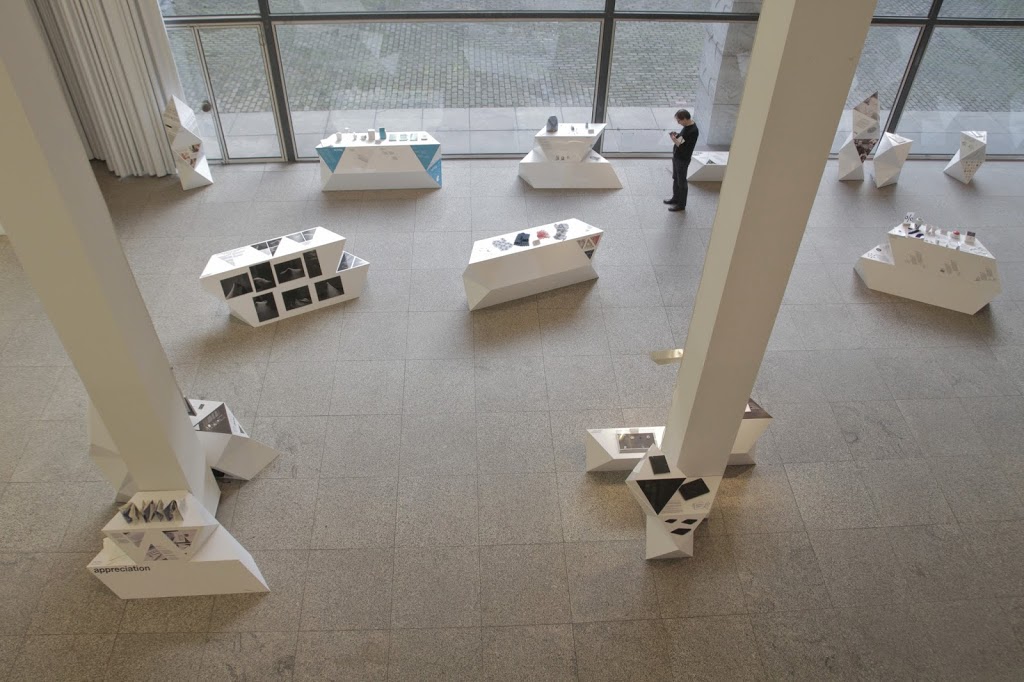 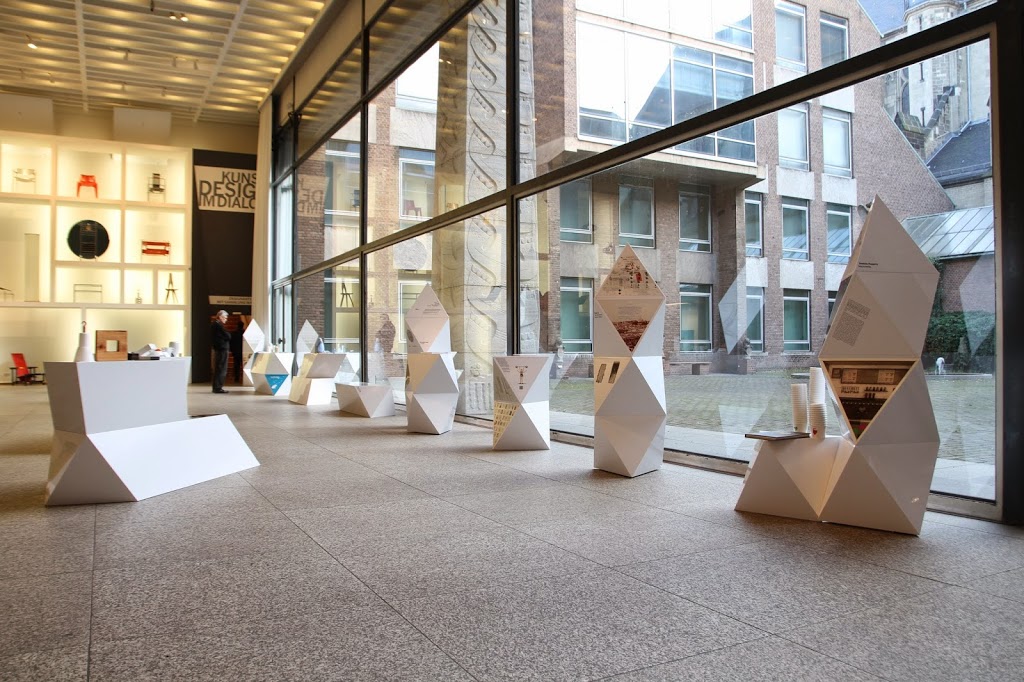 Images 13 – 16: variations of the all-round display elements of the exhibition design of “Architectural Particles” (May – Aug. 2012) and “Köln Design Preis International” (Oct. – Nov. 2012) at MAKK, Cologne.

The geometry of the display modules is based on a sphere packing method known from the structure of crystals. In the arrangement of non-overlapping spheres emerge octahedral and tetrahedral gaps. The resulting volumes remind of modular construction types from past architectural eras and turned out to form a compact and easily conceivable yet dynamic and highly adaptable system for the curators, design team and client. The polyhedral elements are made from white, glossy Vivak® plastic sheets (sponsored by Bayer Material Science), which are glued on the corners and can be combined into a variety of elements (pedestals, columns, projection surfaces, information boards), depending on the particular location and requirement.

The use of digital design and modeling tools, especially Rhino 3D in combination with Grasshopper and Python significantly simplified the creation of spatial simulations and the processing of manufacturing data. The flexibility of these tools allowed the modification of the overall design layout up until the very last moment and automated the technical processes such as unfolding the elements, geometric modifications and the creation of the different milling angles.
In this project the predominant geometrical design code was already defined at an early stage, which created a reasonable base for the development and use of computational tools in terms of partly generative-iterative, partly modeled shape configuration and the algorithm-based generation of production data. With pre-defined, rule based standards for the fabrication data a highly efficient communication with the CNC producers could be achieved. The flexibility and ease of the system to form different arrangements, tessellations and elements, actively engage the client in the spatial design process and give him the freedom to adjust and change even after the architect has long left.

Conclusion
The idea of integrating participative strategies into the architectural design process is certainly not new and in some cases even common practice. Usual attempts include polls or surveys but also workshops with future tenants and communities to give them a sense of involvement. Yona Friedman, a vivid advocate of user-focused design policies, however argued for a more radical approach. In reference to both Konrad Wachsmann and Kurt Schwitters, he suggested that architecture should provide not more than a framework, a system that he later called “Merzstrukturen”, in which the inhabitants could create their environment according to their own needs and desires.[6]
The crucial and most difficult part is to establish such a framework and to decide on how strong it has to be and what can be left open to the creativity of the user.
The projects described above represent a selection where this approach has proven to be fruitful, but there have also been other attempts, which were not so successful. While the studio has over time developed strategies and templates based on experience and research it is still impossible to predict entirely how a project will be received and used, since it is always strongly dependent on the personality of the respective user. But this kind of uncertainty also makes it very exciting since it allows for unforeseeable development, evolution and surprise.